Did Ancient Aliens Wrote The Human History? History is full of anomalies which defy our accepted perceptions of the people who called Earth home before we did.

The more historians and anthropologists uncover about past civilizations, the more questions we are left with. Startling new evidence has pointed towards outside intervention from beings of another world intervening in the development of human civilizations.

History is peppered with unanswered questions that challenge historians to think outside the box when coming up with logical conclusions. The planet is littered with exquisite relics from the past, many of which appear too advanced to be the work of ancient man. 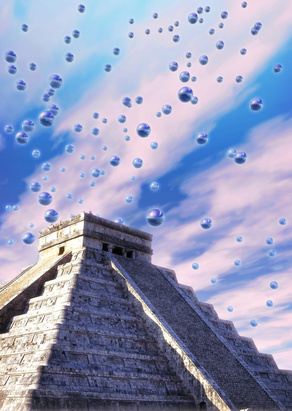 Human beings pride themselves on creating technology advancements, constantly superseding the efforts of past civilizations. But are we really more advanced than our predecessors? Or have the high-tech weapons and rockets of today actually been developed as repeats of past technology?

Could it be that our ancestors were able to develop seemingly incomprehensible technological advancements, because they were gifted knowledge by visitors from beyond our galaxy?

There are some interesting signs that point towards alien influence.

If ancient art has anything to say about it, the answer might prove a startling contrast to what we assume we know. There are many incidences of ancient artwork, carvings, and ancient texts, discovered by modern anthropologists, which paint a picture of ancient people holding some pretty impressive advanced technology. Made by “Ancient Aliens”?

Archaeologists have uncovered many cave carvings and paintings which depicts items more suited for a modern blockbuster move than an ancient cave. Laser guns, rockets, and jet fighters all appear with startling regularity, thousands of years before such technology supposedly was ever conceived of. It has been discovered that ancient dwellers in Columbia created small pendants, that bared a striking similarity to high-flying jets.

Since we know that much of ancient artwork was created to reflect a civilization’s experience and their surroundings, such as natural animals and food sources, can we be lead to believe that these tokens depicting, what we know as advanced aircraft, were made as recreations of objects these ancient people saw in the sky?

Drawing Lines in the Sand 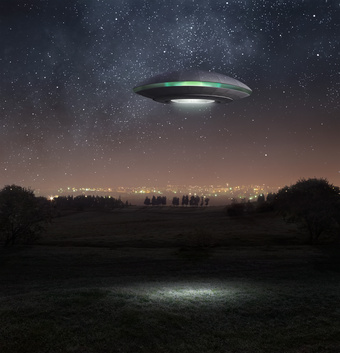 Why would the people who lives in Peru in ancient times need a runway landing strip? If you subscribe to conventional history, they didn’t. If you believe that extraterrestrials frequently landed and took-off from this spot, the answer becomes obvious.

The Nazca lines are a startling image, located a mere two hundred miles outside the city of Lima, Peru. At the spot of the mysterious Nazca lines stands a thirty seven mile stretch, spanning one mile wide across, of pure runway.

The lines were discovered, accidentally, by a pilot flying overhead in the 1930s. In fact, from the ground, the lines are undetectable, which means they were almost certainly created for use by someone flying above them, perhaps to serve as guides for landing a craft, as with modern-day airport landing strips. It is only from the air, observers can truly understand the precision and accuracy with which these lines were created, running perfect parallel to one another.

The planet is riddled with structures which, by all historical accounts as we know them, should not exist. One such incidents is the Carnac stones of France. The continent of Europe is populated with many instances of megalithic sites, meaning large structures made of enormous stones with an interlocking design completed without the use of traditional bonding agents such as mortar or cement. A popular example aside from the mysterious Carnac stones of France is England’s famous tourist site, Stonehenge.

The immense dimensions and complicated mathematical design used to created these structures is a knowledge that we cannot crack or reproduce even to this day. The Carnac stones, located in the small village of Carnac in Brittany, France, are a particularly curious example.

The complete structure consists of three thousand individual upright stones, all locally sourced, and erected at some point around 3300BC, supposedly by human hands.

But did the Ancient Aliens have a hand in assisting these human hands? The sheer magnitude, and puzzling complicated alignment of the stones suggest that this is a possibility.

The stones are dense and heavy, with the alignment containing dolmens, tumuli, as well as menhirs. The process of up-heaving and positioning the stones would seem impossible without advanced technology and lifting mechanisms, the likes of which would challenge our modern equipment.

It is Written in the Stars, But Was it Written with Help From the Stars?

Moving south towards Egypt, yet another mystery exists that challenges everything we think we know about the process of human history. The temples of Karnak in Egypt took over thirteen hundred years of construction in order to be completed. They now stand as the largest temple in Egypt. But that’s not the most impressive aspect of these monuments. The details on the structures are carved with a level of symmetrical accuracy and precision that is simply inconceivable for the time in which they were constructed.

They are believed to have begun construction around 1700 BC, yet there is no tool that we know of existing at that time that could have achieved what was created at the site in Karnak.

Were the people who toiled to create this awe-inspiring construction, guided by the hand of some unknown source of intelligence?

The Sound of the Future

The island nation of Malta hosts yet another construction anomaly. Here lay ruins which were designed with the incorporation of acoustic technology. This means that three thousand years ago, primitive people designed buildings using the science to manipulate the vibrations and mechanical waves of the universe.

This type of scientific manipulation has been closed off by even the brightest of scientists until becoming a mainstream scientific discipline only recently for incorporation in our modern advanced technologies.

These incidents of ancient people colliding with advanced technologies barely scratch the surface on all of the mysteries concealed on our planet. The unanswered questions threaten to dissolve and crack open all of the assumptions modern people, have held about the development of the human species.

More and more signs point the idea that we are not alone, nor have we ever been. The only question left is: are the ancient beings will come again to teach us more?